Andrew is very active member of Slovenian community in Australia. He talks about life in Australia and his experiences in Slovenia. 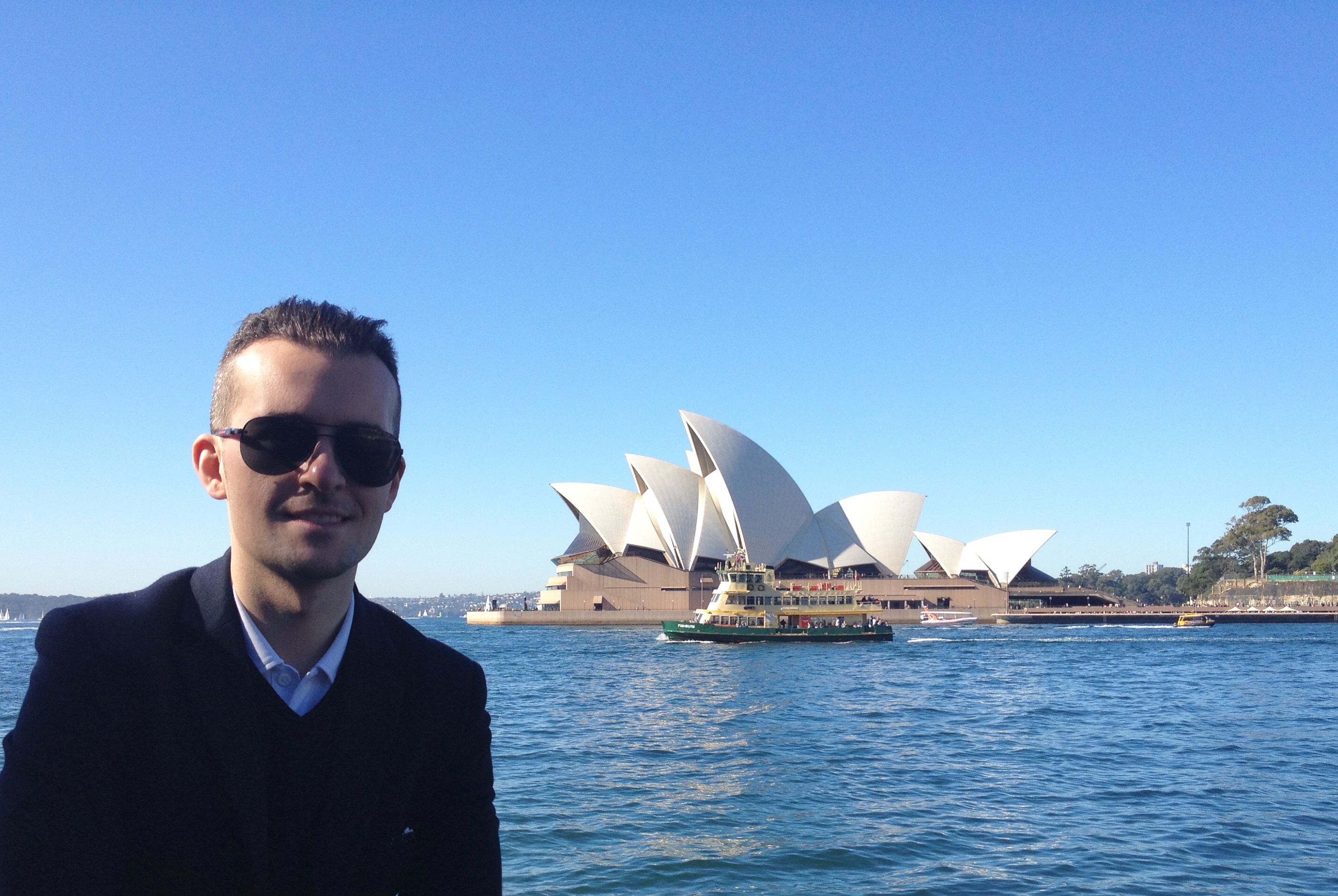 Could you please present yourself?
I am from a Slovenian migrant family, whereby all of my grandparents were born in today’s Slovenia. They all decided to migrate to Australia to start a new life for themselves and their children, but remained fiercely patriotic of their homeland and have contributed much to their community here. My grandfather Lojze Jerič is a celebrated mosaic artist who has donated many artworks to churches including one to the famous pilgrimage site Brezije in Slovenia.
I have always had an appreciation for my heritage and was interested in being a ‘Slovenian Australian’ from a young age. The fascination for my ancestral homeland led to some amazing experiences including a trip to Slovenia as a fourteen-year-old boy with my grandparents. It was there that I encountered the people, food and culture at its most organic source and this helped give context to the idea of being a Slovenian myself. An expedition to the peak of Mt Triglav and the mandatory štriht ceremony christened this identity once and for all.

Whilst studying Slovenian as a foreign language at the Victorian School of languages under the instruction of Sandi & Saša Ceferin, I was given an opportunity to complete an exchange program at a Grammer school in Slovenia. The experience allowed me to engage with native speakers of Slovenian who were my own age and proved instrumental to the development and retention of Slovenian language for me.
http://www.thezaurus.com/forums/viewtopic.php?t=32
http://www.druzina.si/ICD/spletnastran.nsf/clanek/57-27-MladiVal-3

After completing matura and passing my Slovenian language subject, I focused on my tertiary studies and enrolled at Monash University in a Bachelor of Arts, majoring in International Studies and Politics. My interest in Slovenia and its newly declared membership of the EU, led to a decision to graduate with a minor accreditation in European Studies also.

Upon the completion of my Bachelor I thought about study in Slovenia once more and made the decision to enroll in a Master program at University of Ljubljana. I thought about studying economics this time and therefore applied to study at the Economic Faculty. At that time I became interested in the Slovenian diaspora and became involved with an organization named Slovenci po Svetu; headquartered in Italy (Benečija), it strives to connect Slovenian migrants living abroad with their ancestral homeland and gives descendants an opportunity to experience it through regular staged ‘study trips’.

I was fortunate enough to participate in one of those trips and met other young people from Australia, Canada and Argentina. I saw that despite us being from different countries, we all shared a common history and this became a foundation for our friendships, which continue to this very day.

During my studies in Ljubljana I made contact with Mr Klemen Žumer, a prominent Slovenian who worked at the European Parliament in Brussels and wrote to him to apply for an internship. He invited me to visit him and speak about the prospect of employment at the EU parliament. After completing one semester of study in Slovenia I applied for the Erasmus program and selected a university in France to spend a semester abroad. The university I selected to study at, IESEG was in Lille, a mere 45min high-speed trains ride south of Brussels and so I visited Mr Žumer at the first opportunity.

Mr Žumer, who had spent much of his youth abroad, including study in Canada and the UK, had similar fascinations with the experience of Slovenians living in foreign countries. He and I shared a similar passion for connecting all Slovenians and improving relations with Slovenia and its compatriots living around the world.

A few months later I went to work for Mr Žumer at the European Parliament and met a number of young Slovenians who were working or studying in Belgium. I realized at this time how intelligent and talented Slovenians were and was inspired with their determination to represent their country in the best possible light. Many of them loved their tiny country as much as I did but had sort professional opportunities abroad to develop their career, much like I had done also.

After returning to Slovenia I sort work opportunities whilst I completed my masters but had difficulty and so decided to finish studies in Australia and after gaining employment at Australia’s largest retail bank Commonwealth Bank of Australia.

Could you please tell us more about life in Australia and Slovenian community?

Living in Australia is easy and relaxed. Australians are not as worldly as Slovenians, but they are just as hospitable and perhaps even friendlier. The weather is generally good all year round and there are lots of employment opportunities for open-minded people. I have seen many young Slovenians emigrate here in recent years and they find it easy to find work and be involved in different activities and sport.

Of course they all find challenges, but in my opinion it is much easier to find your way in Australia than Europe in general. The cost of living can be much higher however, with rent, transport, food and especially alcohol being more expensive than prices I experienced in Slovenia but perhaps more reasonable than those in the UK or Belgium.

Australia is a big country with most of the population living on the eastern coast of the country. Most Australians live in one of the major cities, which are in close proximity of the sea. Surfing and going to the beach regularly is very much part of the Australian lifestyle and most Slovenians find that to be one of the best things about living in Australia. Besides a very tiny part of the country that receives a small amount of snow each year in July & August, Australia has a really mild climate with warm Christmas’ & New Years; something that many Slovenians find hard to imagine until they experience it!
I am a third generation Slovenian; meaning my grandparents were all born in Slovenia. I was born in Melbourne, but I was raised to appreciate both my Australian and Slovenian identity. Being Slovenian in Australia as a child meant attending Slomškova Šola (Slomšek School) at the Ss Ciril & Methodius Church in Melbourne and also the occasional trip to one of the Slovenian social clubs Planica, Slovensko Društvo Melbourne, Jadran or a number of others to mingle with other Australian Slovenians.
Those clubs gave children like myself a stage to perform and helped facilitate learning about Slovenian culture and music. Each year, an Australian Slovenian Youth concert was organized in a different Australian city to show case talent and allow audiences to enjoy their children and grandchildren’s appreciation of Slovenian culture.
There were demonstrations of Slovenian folk dancing, poetry, drama and music and performers like myself enjoyed performing just as much as audiences enjoyed watching it.
I have discovered that it is still possible to be Slovenian even if one does not live inside the borders of Slovenia. After all, a nation only exists by the presence of its people and their own understanding of their identity.

I encourage any young Slovenians who would like to try life in Australia to do it. I am happy to help anyone with information about work, study and any other information they require. The best way to reach me is by email: andbratina@gmail.com 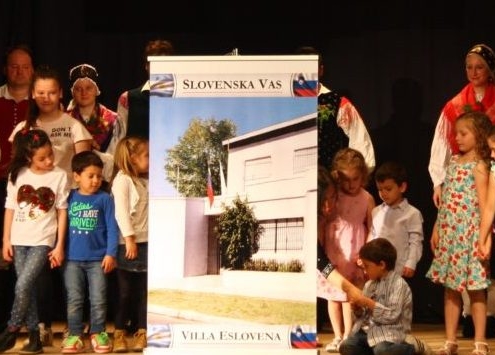