Milena Zupančič, the multi-award wining Slovenian theatre and film actress, was decorated with the Golden Order for Merits by President Borut Pahor on Thursday. 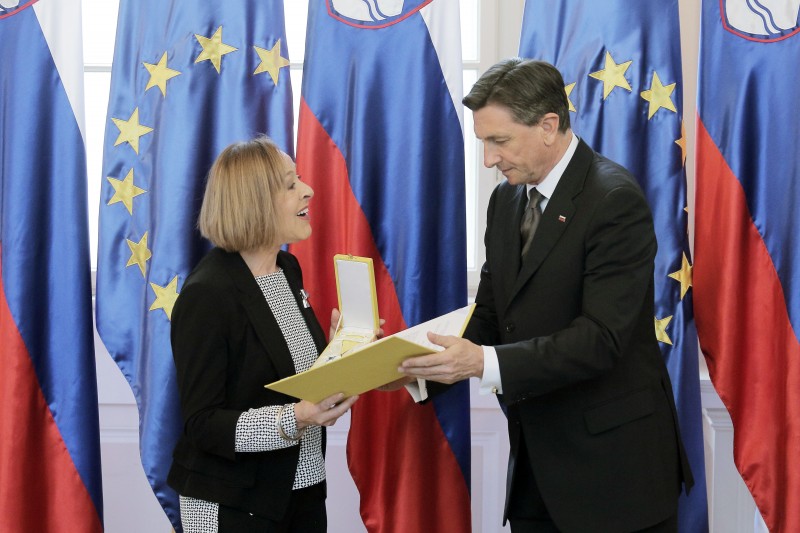 Perhaps the best known Slovenian actress, Zupančič was honoured for her "valuable" oeuvre in the theatre and on film, which is also recognised internationally, and for her promotion of "culture of solidarity".

The 69-year-old actress has appeared in a series of timeless roles in the theatre, on the silver screen and on television.

She has won the major Slovenian awards for her achievements, including the Prešeren Prize, as well as many accolades in the region of the former Yugoslavia. She also won the Actor of Europe award in 2015.

Zupančič was Slovenia's first UNICEF ambassador, a mission she performed for 11 years, fostering the spirit of solidarity, charity and mutual help, the ceremony at the presidential palace heard.

Her popularity and her reputation of a great actress place her among the charismatic Slovenians whose ideas, opinions, reflections and doubts are cherished by the broadest public, the president's office said.

In her acceptance speech Zupančič thanked the president for increasing the number of female recipients of decorations as male winners prevail.

She also thanked her colleagues for the path they walked together, which she said although often thorny had been wondrously beautiful and rich even more often.

Pahor also presented three other decorations, including the Order for Merits on a group of Slovenian scientists involved in the ATLAS experiment at the European particle physics laboratory CERN.

The group's head, Marko Mikuž, commented that the honour confirmed that science like culture was an essential condition for a nation's survival. Science is not just a cost but also an investment and opportunity, he said.

The other Order for Merits went to Jožef Smej, a priest, theologian, writer, poet, translator, researcher and church historian, for his lifetime work and for his contribution to the spiritual culture of the nation.

Smej, who in the past served as auxiliary bishop of Maribor, has been involved in the translation of several pieces of church literature, including the Bible.

He shared the award with his colleagues serving across the lands populated by Slovenians and with catechists who are bringing up young generations.

The Medal for Merits went to the Ljubljana antiquarian bookshop Trubarjev antikvariat for its expertise and contribution to reading culture.