An American searching for relatives in Bela Krajina

There is a lot that can be learned from the history of our families; genealogical research is the window to who we are and where we came from.

Over 25 years ago, I started my family tree as a school project. Back then it was only an illustration of my immediate family: aunts, uncles, cousins and grandparents. Over the years, I continued to add many more people--grandaunts and granduncles, great grandparents and others. I had the benefit of the knowledge of my grandaunt and two of her cousins, who, were all born in the early 20th century. They, being of a different generation than anyone else I knew, allowed me to learn about people who no one else could tell me about. Their work will never be taken for granted or forgotten as they are the reason why this became a passion for me. Despite age being the reason why their progress on this work ended, my work never stopped despite the, at times, slow progress that I was making.

It was only years later that I realized that my cousin had been doing the same work as I was, just using different resources. We eventually joined our research together and continued onward with our work. Once we had combined our findings, our interest only grew of all of the connections we had to other families. This led us to reach further and sent us searching for more resources which led us to our first great find, the Archdiocesan Archives in Ljubljana. This turned out to be a great investment in time as we were able to answer questions that had circled around our family for years which never had any answers with solid evidence to back them up as well.

Shortly after, we learned of the family books that were kept in churches as a form of census of the people in each parish. This was the next evolution in our work. With this information available to us, our interest only escalated further. 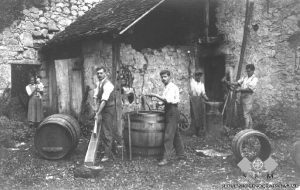 In 2011, my cousin and I took a trip to Slovenia together to gather as much information as possible on the village from which our parents came from. With that information in hand, we returned home and for 4 consecutive days, we worked for 16 hours a day to fully document our findings from our trip. With every name added came two more questions about who the newly added person was. By the end of the 4 days, we had added over 3,000 names to our family tree. With all of the other research done to this point, we had well over 4,000 people in our family tree with more questions than ever before. I think it was at that point that we had realized that we could not stop there. We had added multiple generations of grandparents, second cousins, third cousins and even more complex relations.
With every degree deeper, we found connections to other villages and that essentially defined the fate we have come to terms with now; our work will never stop.

Now, 6 years after our first real discoveries outside of our immediate family, we are approaching 25,000 people in what is no longer just a family tree but a genealogical picture of the people of a small portion of the Bela Krajina region of Slovenija. We have fully documented 2 parishes and we are currently working on our third with at least 4 more parishes on our to-do list. We have been able to help many people in Canada and the United States reconnect with their roots, which has been one of the most fulfilling outcomes of all of our efforts.

While there are some people who may have the skills to do this work themselves, a majority do not. It involves having an understanding of multiple languages including Slovenian, German and Latin and a propensity to accurately document historical documents; needless to say, it is a demanding task. It is relatively easy to find a genealogist to do the same work for you but it always comes at a cost.

Our goal always has been and always will be to provide this information freely to anyone who requests it. The greatest benefit of studying villages and whole parishes is that you learn a lot more about the people who lived there than by only studying a single family. So much more can be learned and told about those families which is the true reward in what we do.

We are always looking for people to help us continue our work whether it involves contributing literary material, genealogical material or even financial support.
The big picture includes completing a full and comprehensive genealogical profile of Slovenia starting in Bela Krajina but this is something that we cannot do ourselves. We want to learn about the country that we come from, the country we live in and the people who were here before us and share it with others.

We encourage you to visit our site at gfamilytree.com and considering supporting our work.