The Brazilian postal service will issue two postage stamps to celebrate the 25th anniversary of Slovenia's independence and the diplomatic relations between Brazil and Slovenia. 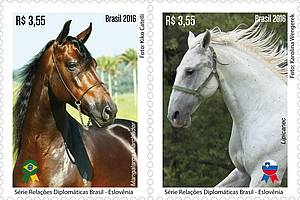 The postage stamps will be presented at today's reception as part of Slovenia's National Day celebrations, organised by the Slovenian Embassy taking place at the parliament in Brasilia.

The postage stamp launch will coincide with the opening of the "I Feel Slovenia. I Feel 25" exhibition in Brazil's capital to mark the 25th anniversary of Slovenia's independence.

The Brazilian postal service Correios do Brasil will issue 600,000 postage stamps as part of its Diplomatic Relations stamp series. They will be available from Wednesday on at postal offices in large Brazilian cities.

The Slovenian Embassy in Brasilia has also collaborated with Correios do Brasil and Slovenia's Kobilarna Lipica stud farm to publish a brochure on Slovenian history and on the Lipizzan horse in Portuguese and English.

The 2016 Rio Olympics will be the first Olympic Games to take place in South America and the first to bear the image of the Lipizzan horse as one of its heralds.

The white Lipizzan horse is a native Slovenian horse breed and a proud symbol of the Slovenian national heritage. The Mangalarga Marchador horse is meanwhile a native Brazilian breed, highly esteemed for its beauty, intelligence and endurance. (Source: STA)