Bringing the Zither Closer to People

Her love for the zither took Urška Matjašec, who is originally from Logatec, to the prestigious Mozarteum University in Salzburg where she will finish her studies this June. Her goal is to bring the instrument closer to the people and prove that it can conjure up more than just the soundtrack of Cvetje v Jeseni (Flowers in the Autumn). 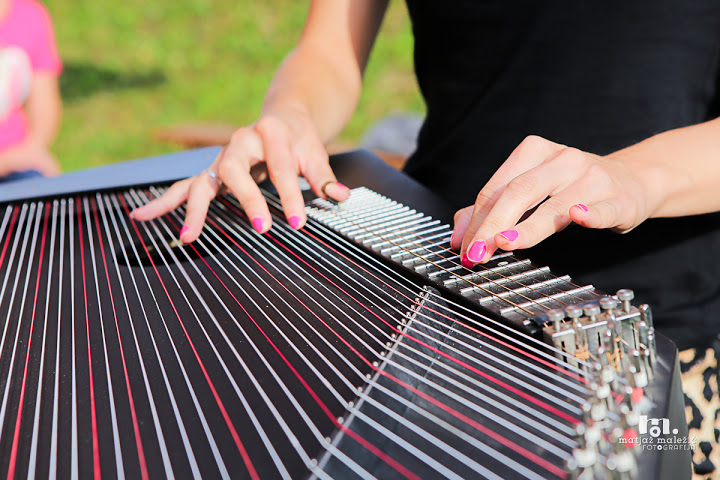 Urška grew up in Logatec where she attended the Osmih Talcev Primary School. She has always been very active. She attended courses in the English language, dancing, handball, fine art and singing and was also a member of the scout association. “When I was nine, I wanted to start playing an instrument. “When I was nine years old, I wanted to start playing an instrument and I was most drawn to the zither. I was taught by Kornelija Lovko,” says Urška, remembering how she started her musical career. After finishing her primary education, she enrolled in the Jože Plečnik High School in Ljubljana and attended private zither lessons in Grobelno. There, she was taught by Irena Zdolšek for four years.

She has always been fond of music and says it makes her feel alive. In kindergarten and primary school, she attended dancing lessons and whenever they and whenever they performed she wanted to be in the front row. At the age of nine, she was deciding whether she wanted to play the zither or electronic keyboard. “At the time, I didn’t know exactly what the zither was. I knew it was made of wood and that it had strings that produced a nice soft sound. I didn’t even know how big the instrument was. I wanted it to be small; I didn’t want to have a big zither. Interestingly, I now own a huge one,” says Urška, recalling her first encounter with the zither. It didn’t take her long to decide which instrument to play – she opted for the zither pretty soon. She still remembers the entrance exam at the music school,” I was so proud and thrilled when I announced I wanted to play the zither. I also remember it was there that I met my future zither teacher on that very day. 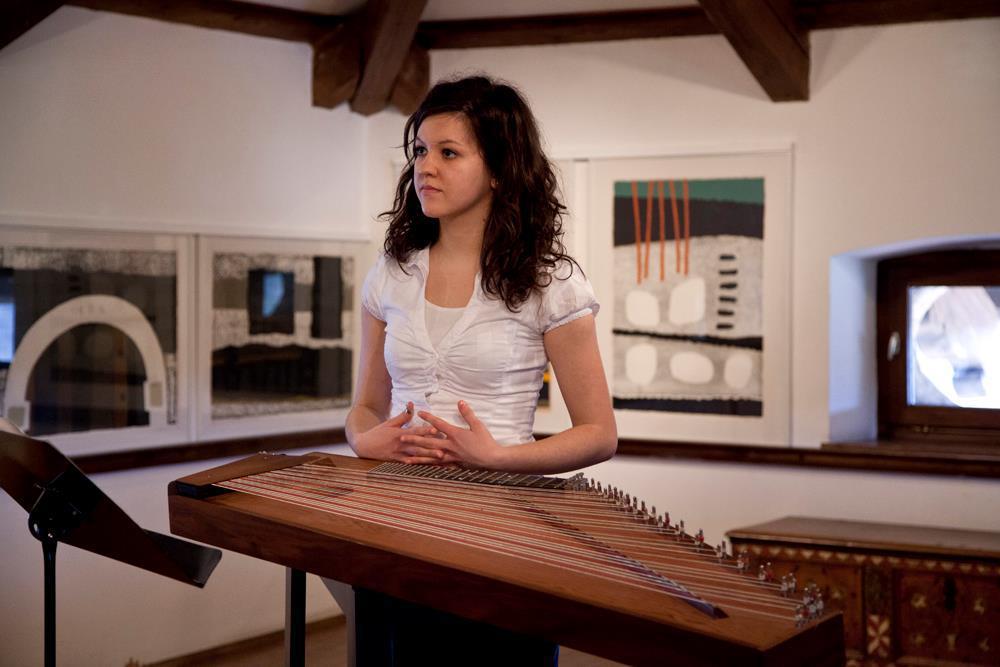 She decided to pursue zither studies at a very young age (she was only eleven) – only a year and a half into her zither lessons. In Slovenia, we don’t even have secondary level zither studies, nor do we have a zither department at the Conservatory for Music and Ballet in Ljubljana. Thinking back on those days, Urška says, “my only option was to go abroad. Initially, my goal was Germany (Munich), however, in my fourth year of high school I changed my mind and opted for Austria (Salzburg). From then on, I started to see foreign countries as an opportunity to fulfill my dream. After all, they offered a chance I didn’t have in Slovenia. I started my journey with complete determination and a great deal of bravery. I often heard from people that I was a brave girl.” 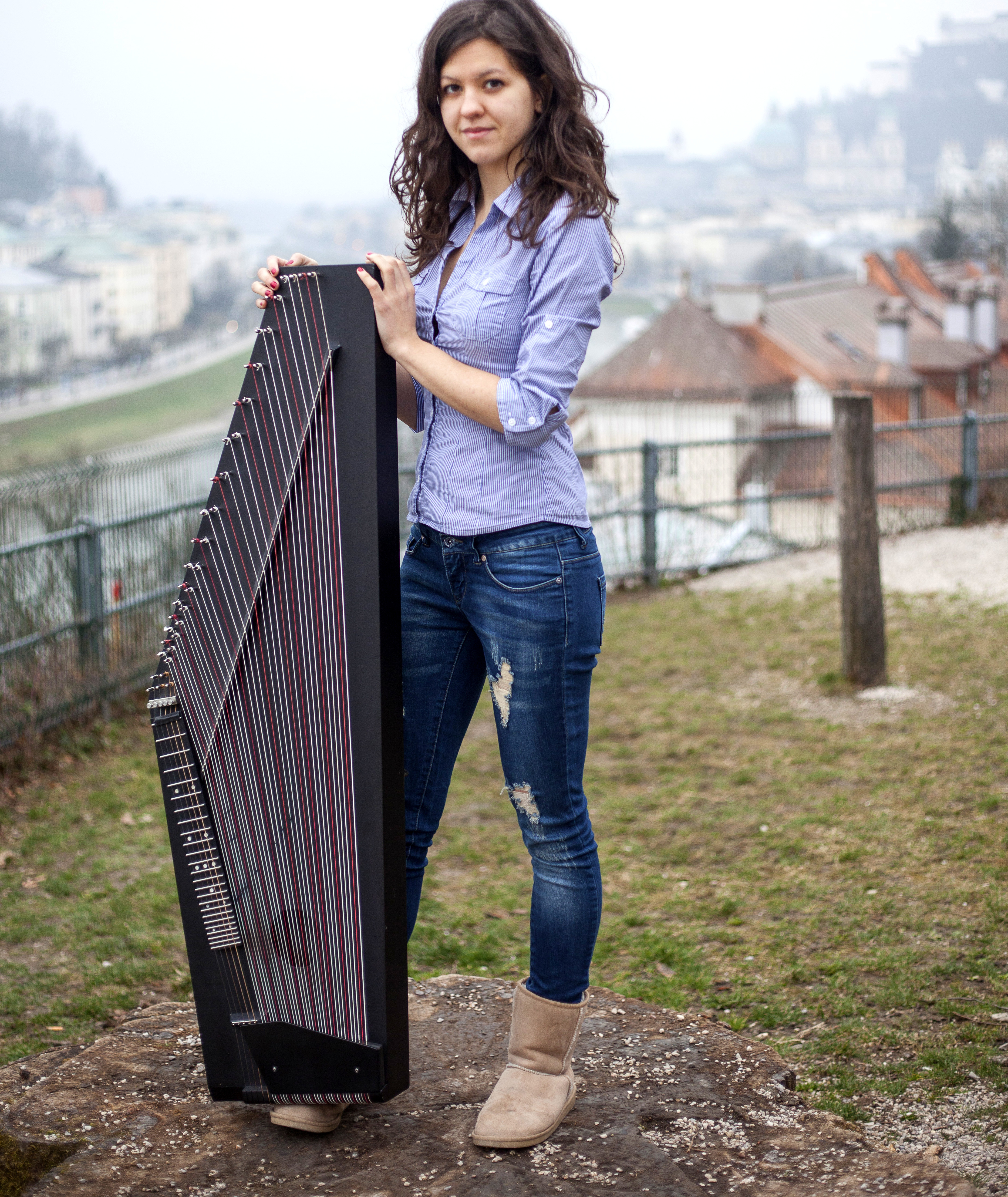 She always liked the sound of the zither for its softness but she was most inspired by Kornelija Lovko, her first teacher, “we admired one another. It was her whom I got the love for the instrument from. She encouraged and motivated me. It means a great deal to a nine-year-old child that someone sees talent in them and helps them develop it.

Living is great in both

Urška thinks that life is great both in Austria and Slovenia, “I love being in Salzburg, I adore it. However, I love returning home. Austria offers many opportunities which is why many Slovenians seek and find a job there. Moreover, it pays better.”

Austria is more expensive than Slovenia, especially services like restaurants, cafés, hairdressers, getting a driver’s license, health services, accommodation, etc. “Stores are like the ones we have in Slovenia. People are friendly and open but not as temperamental as Slovenians (I’m talking about Austrians). In the middle of the night, Austrians won’t go for a kebab but rather a sausage and a bread roll. Stores in Austria close at 6pm or 9pm and are mostly closed on Saturdays and Sundays. There is a certain beauty to it all,” says Urška.

What she misses most in Austria are her boyfriend, family, “and mom’s cooking, of course!” As she says, Salzburg is highly unpredictable, “sometimes, the streets are empty on Friday nights, all the pubs closed of abandoned. That’s quite interesting. It’s not something one would expect on a Friday night. Then sometimes, things are different: streets are full of people and there’s music coming from the pubs. Even though it’s Tuesday.”

She admits that studies are quite difficult because she takes many different courses. Aside from that, she also has to practice at least two hours a day. “But it works! The only obligation is that you have to finish all courses in eight semesters. How and when you do them is not important. That means that each semester you can take those courses that interest you. A great system,” she tells us, enthusiastically.

The zither is an interesting instrument

After finishing her studies, Urška wishes to become a teacher of the zither, play in concert, arrange and compose her own music, record her own compilation and – most importantly – bring the zither closer to the people. “I want to show people how interesting the zither is. It doesn’t only sound great in Cvetje v Jeseni (Flowers in the Autumn) and Tretji človek (The Third Man), which are the most famous zither songs. I still don’t know where I will end up after my studies but it certainly won’t be in Slovenia. I see myself as an important zither player and want to share my love for the music with others.”

Urška is already performing a lot. She normally plays at openings of exhibitions, different events, weddings, funerals, anniversaries, celebrations and birthday parties. What she likes the most, however, is performing Austrian and German hotels. She has also competed in numerous regional, national and international competitions where she won bronze, silver and gold awards and special awards for interpretation and musicality. “I’ve also competed in a very famous international competition Svirel and the international zither competition in Munich. Each competition brings new experience and allows you to learn something new – especially management of fear and stage fright, which are always present at such events. You also learn to endure. You have to practice many hours a day for months and face your own weak points, fears and insecurity. In that respect, each competition makes me stronger and more confident. It is a proof that I can do it. The goal of each competition is your own development and progress – proving to yourself that you are capable. I see competitions as competing with myself.  That’s because one should only compare themselves to themselves alone. You need to ask yourself if you’re better today than you were yesterday. If you’ve progressed during months of practice, you’ve done the most important thing and it is something each musician should be extremely proud of – even if they didn’t get the highest number of points.”

To all those who wish to study abroad, Urška says that they should do it if they think it would do them good. “The experience abroad is extraordinary. You meet people from different places, get to know the culture, learn the language, see new places and become more independent. An important piece of advice: you mustn’t be scared of the foreign language, costs of living, strangers, not succeeding or anything else. The language can be learned fast because schools offer cheap language courses. You can also learn a language at some other University. And when you meet new people, language acquisition progresses really fast. Schools also give out scholarships (I don’t have one though) and getting a job is not that difficult so you can easily earn some money. If you try, you can also find some inexpensive student accommodations, etc.”

In ten years’ time, Urška sees herself living a family life filled with music. “I don’t think about where I will live. I’ll let that be a surprise. I will continue to play the zither, hoping to bring it closer to the people. That, however, won’t be the only thing I’ll do in my life. I am planning to dedicate a lot of time to my family and my own personal development – both on the spiritual as well as the material level.”