Concert by Laibach and the RTV Slovenia Symphonic Orchestra in Brussels

On Tuesday, 9 February 2016, Laibach will be performing alongside the RTV Slovenia Symphonic Orchestra at Bozar, the Fine Arts Palace in Brussels. The concert will feature new interpretations of the band’s songs, including those from the Sound of Music and Spectre projects and songs from the WAT album, dealing with the refugee and migration crisis in Europe and the Middle East.

The Brussels repertoire is the result of collaboration between Laibach and the RTV Slovenia Symphonic Orchestra. Anže Rozman, a young Slovene composer, arranged the songs for the orchestra conducted by Simon Dvoršak. The audience will be able to listen to new interpretations of their favorite Laibach songs, including those from the Sound of Music and Spectre projects. Also performed, will be the songs from the WAT album released in 2003, dealing with the refugee and migration crisis in Europe and the Middle East. This time, the self-proclaimed “engineers of the human soul”, who are capable of producing music that can make the listener both think and dance, will be performing to a seated audience alongside the RTV Slovenia Symphonic Orchestra

The organizer of the event –the public institution Festival Ljubljana – decided to hold the concert in two different locations, in Brussels and in Ljubljana. It is a double event that will first take place on 9 February in the Henry Le Boeuf Hall at the Fine Arts Palace in Brussels. It will then be repeated on 2 September in Križanke, Ljubljana. Commenting on the choice of venues, Darko Brlek stated, “the concert in Brussels will be performed with the intention of additionally promoting the city of Ljubljana. This year it was awarded the title of the Green Capital of Europe. The second and no less important reason for organizing the event in Brussels is the promotion of the program by Festival Ljubljana in the European capital.”

Patrik Greblo, the head of music production at RTV Slovenia says that “for over six decades, the RTV Slovenia Symphonic Orchestra has been collaborating with various musicians. However, we have only been referring to the orchestra as a form of ‘crossover’ for the last ten years. Their collaboration with Laibach is one of their more daring collaborations, especially considering the time and location of the first of the two concerts. This is how musicians working in public broadcast stations can, in our own unique way, draw attention to the current problems of our time and the society in general.” 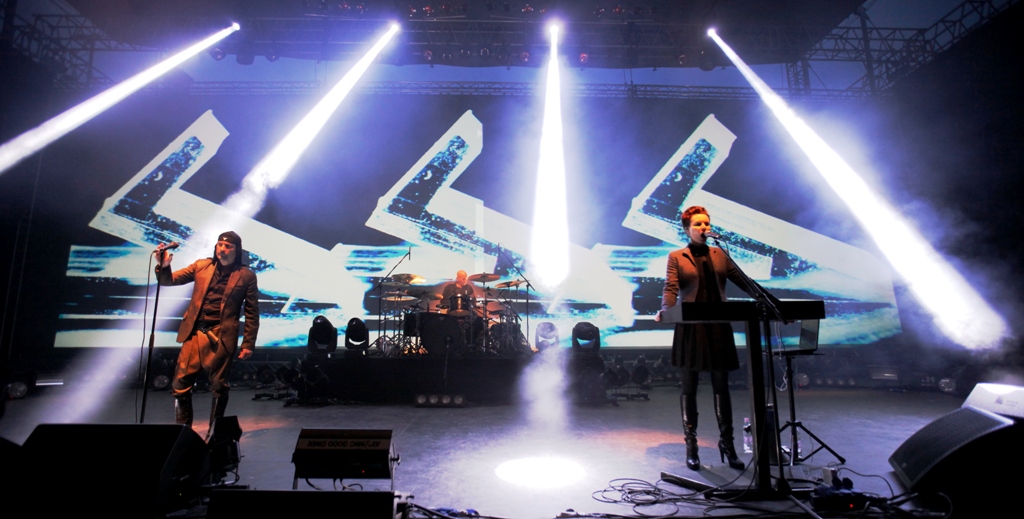 Thirty-five years after their formation, Laibach are the most internationally acclaimed music group from the former communist countries of the Eastern (today regarded as Central) Europe. Aside from being truly genuine, they are also one of the most mysterious and prophetic bands. The band formed in Trbovlje, Slovenia – the so-called revolutionary-communist part of Slovenia – the same year Tito died. The band has been refusing any labels and still refuses to be called “rock”, “pop”, “techno” or “industrial”. In August 2015, they were the first group to have performed in the inaccessible North Korea; the solitary garrison known for military marches, gymnastic fanaticism, odes to the great leader and defiant resistance to the pop culture of the West.

Laibach have been documented in several documentary films and books, among them two feature films (Predictions of Fire, directed by Michael Benson and Victory Under the Sun, directed by Goran Gajič). Laibach’s daring music has been featured in many theatre productions and can also be heard in numerous Hollywood hits such as Spiderman I, Blair Witch Project, Iron Sky and the Alias series.

The band members, who still live and produce their music in Ljubljana, have performed in more than 1,000 concerts all over the world and sold more than a million albums. Aside from numerous rave reviews, they have also received multiple awards and accolades. They have received the Golden Bird Awards, the Viktor Award for Outstanding Achievements in the Field of Media and Popular Culture and the Award of the City of Ljubljana for Outstanding Creative Achievements Home and Abroad.