Gala: ASEF and Cleveland Slovenians Together

A nation of 2 million people can have a great impact on the lives of people all over the world. Slovenians are a living proof of that.

The 4th annual ASEF (American Slovenian Education Foundation) Gala, held in Cleveland on March 25, 2017, was dedicated to American Slovenian inventors, innovators and educators, presented by Dr. Edi Gobec. He has spent most of his life diligently collecting and researching every person of Slovenian background that could be considered a candidate for 'who is who' in any field, and in American science and industry in particular. His book ’Slovenian American Inventors and Innovators' is another of his attempts to honor and respect Slovenians who, with their work, had great impact not only on the lives of Slovenians, but of people all over the world. 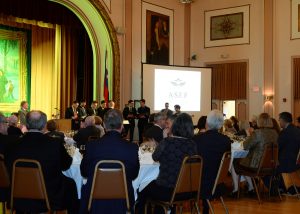 »Slovenians only represent one tenth of a percent of population in the U.S. However, we have contributed 3% of senators and 3% of astronauts to the U.S.«, highlighted Dr. Gobec, clearly demonstrating that Slovenians have an important role in the American society. One of the Slovenians we can be proud of and has had a great impact on technological development is Dr. France Rode, who was also present at the Gala. He was the lead inventor of the first sophisticated pocket-size HP-35 calculator, was involved in the development of first lap top, and holds numerous patents, including three for GPS.

Having the Gala in Cleveland was a unique opportunity for the ASEF to reach broader Slovenian Community in the U.S. The event was enriched with Slovenian music performed by all male Slovenian singing group ‘Mi smo Mi’, based in Cleveland, Ohio. Ambassador of the Republic of Slovenia Božo Cerar congratulated ASEF on its important work on establishing connection between Slovenia and the U.S. in the field of education and science, and spoke in the name of distinguished sponsor Borut Pahor, President of the Republic of Slovenia, who expressed his outmost support to the work of the foundation.

With an aim to enable even more students to follow their dreams and strengthen their expertise, ASEF has been growing its fellowship program. This year there are already 20 positions open with 20 different professors at prominent U.S. universities. In addition, up to two students from the U.S. will be able to go to Slovenia and work with professors there. Ryan, who will go to Slovenia this summer to work with Dr. Borut Ṥkodlar at the University Medical Center Ljubljana, expressed his gratitude and excitement to be given this opportunity with the ASEF.

Thomas Brandi, ASEF President, explained the fellowship program as a two way bridge, connecting Slovenia and the U.S. through education. One lane, the one from Slovenia to the U.S. is already developed and is growing each year. The other lane, from U.S. to Slovenia, is being built in a greater extent.

Jure Leskovec, ASEF Co-founder, underlined the need to expand the fellowship program for American students, and therefore invited Slovenian professors, families, and companies, to open their door to students. The program is being very well accepted in the U.S., growing from 9 fellows last year to 20 in 2017, and they wish for the same trend in Slovenia.

Peter Rožič, S.J., ASEF Co-founder, encourages everyone with the ability and will, to host Slovenian students in the U.S. ASEF fellowship program is changing lives, not only the ones of students, whose worldviews get changed, but also for the hosting families, who take students in their homes. This way students do not only get the professional and research experience, but also the experience of American way of life.

An American searching for relatives in Bela Krajina
Scroll to top