Learning Slovene on the beach on the Danube in Novi Sad

The City Library in Novi Sad in cooperation with JKP "Gradsko zelenilo", along with the agency "Heror Media Pont" and the Minority and Local Media Development Center, organizes the event "Pod krošnjama na Štrandu" for the fifth year in a roll. This event promotes media in the languages of minorities, the culture and the minority communities living in Vojvodina. In the period from July 17 to August 5 participants will learn Hungarian, Slovak and Slovenian language. The sponsors of the event are the Provincial Secretariat for Education, Administration, Regulations and National Communities and the Culture Directorate of the City of Novi Sad. Dalibor Rozic, a member of the City Council for Culture, attended the opening. The general sponsor of the event is the company Coca Cola with the brand Rosa, and the sponsor of the week of the Slovenian language is NLB Bank. 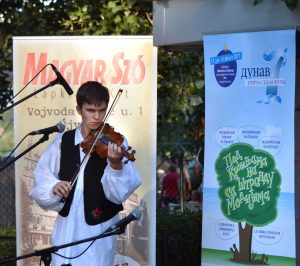 Traditionally inhabitants of Novi Sad, but also all visitors of the beach "Štrand" knows that in their entreating and relaxing moments the open-air library is waiting for them, that is, they can relax and enjoy the titles prepared by our friends from the City Library and Heror Media Pont ". Namely, instead of going to some of the branches of the library, Library came to us. The special value of this event lies in the fact that, while promoting the reading culture, it fosters multiculturalism and multilingualism by offering content in the languages of national minorities from our surroundings. I am particularly pleased that JKP "Gradsko zelenilo", in cooperation with the City Library, will include in their plans for the next year an even more beautiful and bigger house than the existing for 10th anniversary of this project - said Dalibor Rožić.

Dragan Kojić, the director of the City Library, pointed out that the Library on Štrand with the slogan "The library is where you are" has enables for the citizens of Novi Sad to enjoy the selected titles of literature, children's literature, daily newspapers and magazines, Including daily and weekly newspapers in minority languages, on the most beautiful beach on the Danube for nine years now. Five years ago the Library joined the agency "Heror Media Pont" and the Minority and Local Media Development Center. He said that he hopes that the project "Danube Talks 7 Stories" that communicates with minority communities and the majority people and fosters diversity, will perfectly integrate into the prestigious Novi Sad European Capital of Culture project 2021.

Nataša Heror from Heror Media Pont said that within the framework of this year's event, the umbrella project "Danube Talks 7 Stories" starts with the intention that the concept of summer event lasts throughout the year in branches of the City Library of Novi Sad, the library in Sremski Karlovci, Irig aAnd Beocin, and during the autumn will be realized a week of Romanian language and culture.

Oliva Lucia: A Tale of Love, Loss and Leccino in Istria
Scroll to top