Trieste, 13 June - In a cross-border coproduction, the regional branches of the Italian and Slovenian public broadcasters, RAI and RTV Slovenia, have made a documentary to honour the first couple ever to climb all 14 eight-thousanders, Romano Benet and Nives Meroi. 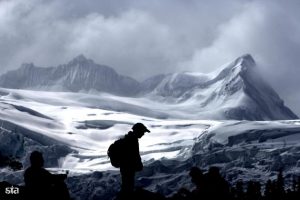 The documentary, written and directed by Vida Valenčič, was produced in a Slovenian and an Italian version and premiered in the Slovenian programme of RAI on Sunday evening.

Benet, an ethnic Slovenian, and his wife Meroi live near Tarvisio, just off the Slovenian-Italian border.

They completed their crown of the Himalayas on 11 May with Annapurna (8,091 m), after their journey to all the mountains higher than 8,000 metres started in 1994 with a failed attempt at K2, the world's second highest mountain.

Not only did they manage to climb the world's 14 highest mountains, but they did so without the use of supplementary oxygen, without fixed ropes and without the help of porters, which exhibits extraordinary respect for the mountains, according to the makers of the film.

Shot mostly in the area of the Julian Alps, the film also features a lot of Benet's own previously unpublished footage from the Himalayas.

Apart from different mountaineering-related topics, like women in mountaineering and the contrast between classical and more touristic ascents to the Himalayas, the documentary also deals with what the pair dubs their 15th eight-thousander - Benet's illness.

Symbolically titled 14+1, the documentary tells the story of how mountains became life teachers for them also in dealing with acute bone marrow aplasia, a rare disease that Benet contracted in 2009.

He has since undergone two bone marrow transplantations and two hip replacements with prosthetics, but he approached this the same way he does climbing mountains - with endless hope and one step at a time.

A Pilgrimage of Three Nations
Scroll to top