Austrian authorities and the Slovenian minority reached a landmark deal

Ljubljana- In April 2011, the Austrian authorities and the Slovenian minority in the province of Carinthia reached a landmark deal on German-Slovenian town signs. Five years on, the deal is believed to have helped considerably improve the atmosphere in the province, but some of its provisions are yet to be implemented. 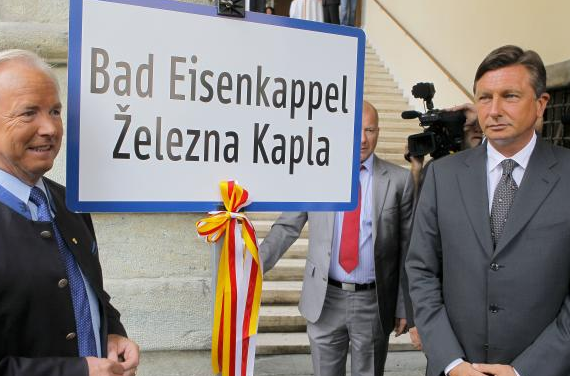 The memorandum on 164 bilingual town signs, the official language and measures for cooperation with the Slovenian-speaking ethnic community was signed on 26 April 2011 in the provincial capital of Klagenfurt by the Austrian federal government, the Carinthian government and representatives of the Slovenian minority in Carinthia.

The Slovenian Foreign Ministry sees the deal as a compromise whose main contribution was that "after a decades-long deadlock and uncertainties, an agreement on erecting new bilingual town signs in Carinthia was reached".

Slovenia, which was not a party in the long and difficult negotiations, and representatives of all three umbrella organisations uniting the Slovenians in Carinthia hope that additional bilingual signs could be erected in the future and that Austria will adopt changes to the 1976 act on ethnic communities.

Passed in a time of the biggest ethnic tensions in Carinthia, "the law does not address in any way the needs of the present nor the challenges of the future", one of the Slovenian minority umbrella organisations told the STA.

Besides new bilingual town signs, the memorandum has also brought, the Foreign Ministry said, a systemic solution to the funding of the Slovenian music school in Carinthia; since July 2015, it has been part of the regional network of music school.

But the memorandum sets down some other solutions which have been implemented only partly, said the ministry, listing for instance the funding of private bilingual kindergartens.

It also hopes that Austria will find similar solutions for the Slovenian minority in the province of Styria.

The Office for Slovenians Abroad shares a view that the situation in Carinthia has been improving as a result of the 2011 agreement.

"Slovenians and Austrians find it easier to live together and the majority population understands the minority better, yet minority rights are not being adequately protected at national level," it told the STA.

The office believes that for its existence and development, the minority would need more funding from Austria and systemic solutions to the open issues such as minority print media.

According to the president of the Association of Slovenian Organisations Marjan Šturm, a rise in the number of children enrolled in bilingual classes is proof that the atmosphere in Carinthia has changed. The share has reached almost 50%.

Similarly, his colleague from the Association of Carinthian Slovenians Bernard Sadovnik said that being bi- or multi-lingual in Carinthia in public is being increasingly taken for granted.

"I believe my election as mayor and the re-election of my colleague Franc Jožef Smrtnik...proves that."

More critically, the deputy president of the National Council of Carinthian Slovenians Nanti Olip said that while the general atmosphere in the province did change for the better, the Slovenian ethnic community could not yet feel any "tangible results".

"What we usually get is partial solutions, while a decisive, new approach which would also repair the damage from the past has not yet been noticed," said Olip.

He believes that one of the most important provisions from the memorandum is the planned reform of the 1976 law on ethnic communities in close cooperation with the minority, which is yet to be seen.

Aleksander Geržina, Slovenia's ambassador to Austrian at the time of the memorandum signing, said there were several elements crucial to the deal being reached in 2011, the most important being "Slovenia's attitude".

"Slovenia started acting in a much more self-confident and ambitious manner in relation to the Austrian government", he told the STA.

The pressure was such that the international community would have a hard time understanding that in democratic Austria, a member of the EU, some basic issues regarding Slovenian minority protection in Carinthia and Styria had not yet been resolved 55 years after the signing of the Austrian constitution.

That the situation for the minority is not as easy as it might seem was however highlighted earlier this month by Slovenian minority rights advocate Rudi Vouk.

In an open letter the Carinthian jurist urged the minority to get interested in public matters as a way of influencing its political representation.

In the opposite case, it will no longer be part of those successful minorities in Europe which find the necessary opportunities and understanding for existence and development.

He stressed that "the assimilation of Slovenians in Carinthia has not stopped, marginalisation is continuing, depoliticization has reached the maximum level, the entire situation is calling for reform."