Patrizia Jurinčič and Lara Vouk are actors. While Lara is still a student, we can often see Patrizia on the stages of big Slovenian theaters. The girls are connected by the fact that they come from Italy and Austria. Patrizia is a Slovenian from Trieste and Lara a Slovenian from Carinthia, namely Rinkole pri Pliberku. The young actors both came to the Academy for Theater, Radio, Film and Television in Ljubljana. Last year, Patrizia finished her master’s degree in theater singing with her performance in Moj 900. Lara is currently in the fourth year of drama studies. 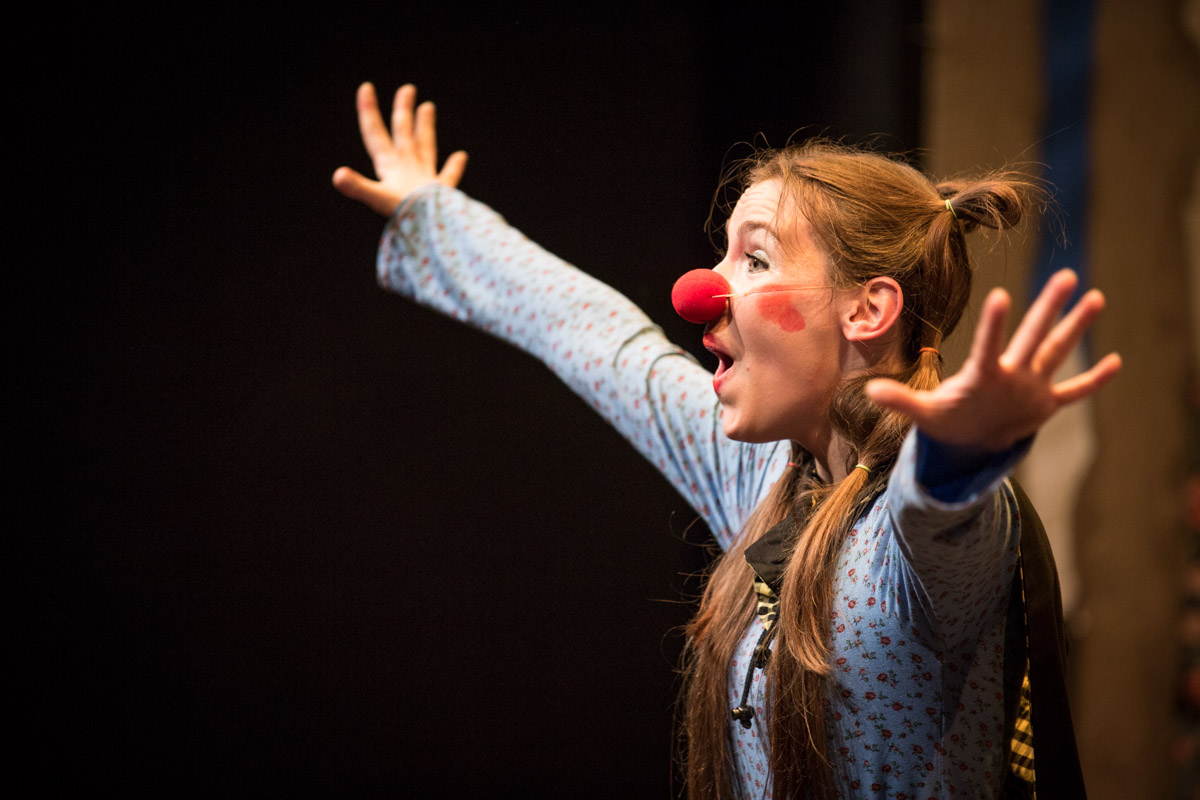 Where does your love for the theater come from? How did your theater career begin?
Patrizia: I started out with Lučka Susič from the Slovenian Cultural Club theater group when I was in my first year of high school. A few years later, I joined Studio Art, an organization under the auspices of the Slovenian Permanent Theater in Trieste. At the time, I started thinking that acting was something I could deal with professionally. The first time I applied for the Academy of Theater, Radio, Film and Television in Ljubljana, I was not admitted. That was when I first decided, it was something I really wanted to do. Seeing how I can speak Italian, I also thought about studying abroad. I was also thinking about going to London or Russia. However, the following year, I was admitted to the Academy in Ljubljana.
Lara: In high school, I was a member of an amateur theater group. That was my first contact with the stage. At the time, I didn’t think about becoming a professional actress. Seeing how I was a student of fashion design, I was more interested in the design of costumes. Then, later on, I got a hunch and changed my mind – I wanted to become an actress

Are you a Slovenian or…?
Patrizia: I am Slovenian and so are both of my parents. I do have a pinch of Italy in me but that is because I used to live there and because I speak both languages. I think it’s a gift, a treasure that one must make use of. I am definitely from Trieste but I never liked the idea that it was something that limits me in any way, thinking rather that it opens up new possibilities.
Lara: I am a Carinthian Slovenian. This is the best way to describe how I feel. I always thought my bilingualism will help me in many different ways. I can speak to more people, learn other languages more easily and have better job opportunities … Being raised in a bi- or multilingual environment is a huge advantage. 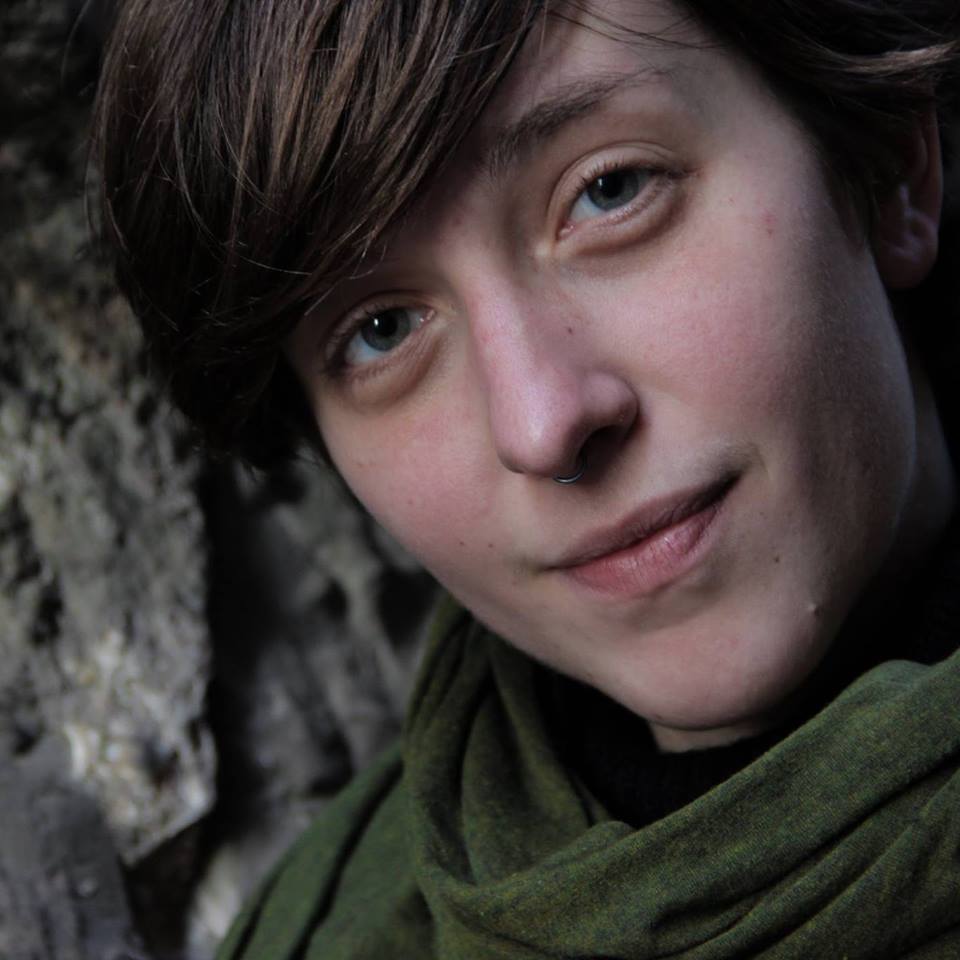 Patrizia, how is your creativity affected by being torn between Trieste and Ljubljana?
Patrizia: This year I am torn between Trieste and Ljubljana and I like it. I had a great season in Trieste with my co-actors. I get a feeling that I have been waiting for the Trieste Theater for a long time – either that or it has been waiting for me. It was great to come back. My personal life, however, is convincing me to stay in Ljubljana but this doesn’t mean that I am never coming back to Trieste. Never say never. Whenever I imagine my future, I see it all around. All I want is to be free and as far as I can see, there are no signs of anything limiting that freedom for me.

What are you working on at the moment? This year, you performed in a number of theater plays in Trieste and Ljubljana.
Patrizia: The big project for me this year was Dogodek v mestu Gogi (Event in the City of Gogi). It’s quite rare to see someone this young getting a role this big. I think it’s both nice and daring of them to have trusted me with this role. I am joined on stage by Daniel Malalan, who is a great actor and also one of the first people I sang with on stage, namely in Ti in jaz, Mali medo (You and Me, the Little Teddy) where I filled in for Vesna Pernarčič. It is great to be able to relive these moments. I am also acting in Kako osvojiti Fanta – 4 simpl koraki (How to Get a Boyfriend – 4 Simple Steps). It is a coproduction of the Theater of Koper and Cankarjev dom. The play is really close to me. It was written by my classmate and it makes me feel like my class is getting back together. Otherwise, I’m also performing in the Puppet Theater’s Japanese Fairy Tales and The School for Clowns in Trieste. They are two children’s plays that I enjoyed acting in. They made me connect with children who are a completely different audience from adults.

However, the first play that I can truly call “my own” is Moj 900. I love acting in it because it interprets what we can a musical the same way I do. In Slovenia, musicals are still a mystery. The only theater who is systematically dealing with the subject right not is MGL. I think that musicals have a great potential which I wish to explore. Moj 900 is a small step in that direction. This year, I am performing the play in Trieste which is quite an opportunity, considering how school productions rarely make it that far. It is nice to see the play is successful.
Trieste and Ljubljana. How are you experiencing the gap between them?
Patrizia: Even though Ljubljana has the same population as Trieste, it is still a capital. As such, it is an intersection, a melting pot – something Trieste used to be but is not anymore. I am sorry that I wasn’t there to experience it back then. Today, it once again has the possibility to become a University city. There is a lot going on in Trieste and there is a suspense that can be felt in the atmosphere – it is both beautiful and fascinating. Sometimes, I take a walk to the St Primus in Santa Croce viewpoint and think about how Trieste is the most beautiful city in the world. It is connected to the sea – Moj 900 is the result of that. Ljubljana doesn’t have a coastline but it is the city where my friends, classmates and boyfriend live. It is definitely a city where I’m planning my future. Trieste, on the other hand, is only bound to my past. But even that cannot be forgotten.

Lara, what are some of your ambitions and wishes?
Lara: A while ago, I mentioned my love for the theater … Perhaps it would be better to call it a love for art. While studying at the Academy, I learned a lot about myself. I don’t want to dedicate my entire life to acting. I’m just going to say it: I want to take on a different function with every new project. I want to act, make costumes, take care of the visuals, music, lighting organizing … I want to create, especially in collaboration with the people who are close to me. We share a common driving force, a common objective. There are projects that make you feel this special bond with everyone working with you. They are the reason why I want to work in this field. The forces that come into existence and the people you get to know … The ideas of each individual growing through others’… I want to work on this kind of projects. What exactly it is that I want to do on those projects is of secondary importance.

What do you look for in the eyes of the spectators?
Lara: A sincere reaction following the play or projection. I don’t want to make things that people will like. I want to make things that I can really feel inside; things that make me feel the need to engage. I am happy if someone identifies with the play, understands it and feels nice afterwards but I am not offended is the reaction is the opposite. All I want is for the spectators to question their own feelings and opinions after seeing a theatrical performance.

How are you torn between Carinthia and Ljubljana? Where will your acting career take you?
Lara: I am currently finishing my studies. For my bachelor’s degree, I am preparing a production. Slowly but steadily, I am also making plans for after I finish my studies. I want to work both in Slovenia and Austria. If I get a chance to work anywhere else, I will take it. Carinthian Slovenians don’t have our own theater tradition and neither do we have any films of our own. I could organize children’s courses and workshops in Carinthia.
I will start working on plays again in the fall, after I do a bit of travelling to unwind. Before the summer, however, I must finish some small music and film projects.

Nowadays, culture and art are pretty much in tatters. They are often shadowed by political affairs, the economic and humanitarian crisis … Do you still have faith in art?
Patrizia: I do. If I didn’t, I wouldn’t be working in theater. Regardless of the current political events (which are not negligible), I still have some hope left for the medium of theater. Even though people go to the theater in Ljubljana, the trend is slowly dying out. The theater is no longer popular but reserved for the elites. I want the theater to go back to how it was in the times of Shakespeare. I believe it is possible. The human energy cannot be substituted for – it needs to be given back to the people. Sometimes people don’t feel that there is a living person on the stage in front of them. They cannot feel his energy… This is what the theater lacks. The actor on stage is lying about something truthful. The theater is a lie that speaks out its own truth. If there is no truth behind the lie an actor is acting out, then there is nothing to be conveyed at all.
Lara: I absolutely think that culture and art are being left behind. However, the state and government are not the only ones to blame – it is also the fault of institutions themselves. But I would rather not talk about it right now. I personally wish to pursue the field of art and culture but I want to do that as independently as possible.