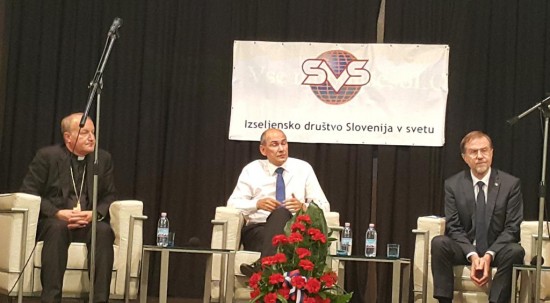 Event was organised by the Association of Slovenian Expatriates in Ljubljana (Photo: twitter)

Event was organised by the Association of Slovenian Expatriates in Ljubljana on Sunday.

Regardless of their ideological differences, the Slovenian diaspora joined their forces at that time, nurturing the idea of Slovenian independence, said Peterle, Slovenia's first prime minister.

"That was when we truly felt the Slovenians on our side," Peterle said.

The defence minister of the time, Janez Janša, said that the foundations of the Slovenian statehood had been laid before 1987 and 1992, when its pillars had been built.

"That was a time when we were not divided as a nation and the only period in the Slovenian history when we were creating our own destiny," he said.

Jamnik, the then auxiliary bishop of Ljubljana and secretary of the then Ljubljana Archbishop Alojzij Šuštar, thanked to the Slovenian diaspora for their contribution to the independence on behalf of the Slovenian Bishops' Conference.

Janša, the head of the opposition Democrats (SDS), was critical of attempts to forge history and the events 25 years ago.

This is possible because people who were not too keen on independence are in charge today and this is also why Slovenia does not have a central monument to independence, Janša said.

Peterle meanwhile said that especially at schools there was not enough talk of the independence war.

Independence did not just come about; first a model needed to be created around which national unity was formed after the independence referendum, he said, adding that political unity had never existed in Slovenia.

Peterle believes Slovenia is "in trouble" today, because it has moved away from the course set 25 years ago. (Source: STA)